When Hearing Loss is Common

There are certain populations where hearing loss is seen regularly. For example, Longshore workers who are exposed to very loud sirens, signaling devices, steel clanging on steel, etc are often found to have a hearing loss after years of exposure. Many machines, such as concrete nail drivers, concrete drills, loud motors and saws, may cause hearing loss. Artillery and guns impair hearing. Police officers who practice without protection commonly lose hearing.
Finally, there is a study that shows a simple means of preventing workers from suffering hearing loss and tinnitus!

In a study just published in American Journal of Clinical Nutrition November 6, 2013 by doctor Yoon-Hyeong Choi and others, they report that there was a lower degree of hearing loss in the American population among those who took Magnesium and Antioxidant Vitamins. Though Dr Choi studied hearing loss, his results also apply to tinnitus. Hearing loss is the most common cause of tinnitus

Title of the article is Antioxidant vitamins and magnesium and the risk of hearing loss in the US general population. Am Jour of Nutrition Nov 6, 2013

What is significant here is that not only did the persons who took these products have less loss in the high tones, but they also had less loss in the low tones, where speech is so important.

Longshore workers are instructed to wear noise defenders, earmuffs, and similar protectors against noise. However it is really a difficult situation. If they wear the ear protection, that reduces noise to the ear, but then, they may not hear the many moving vehicles, cranes or the dozens of dangers where huge boxcars are being constantly moved about overhead. Construction and steel workers have similar dilemmas

This article by Dr Choi presents significant evidence that this kind of hearing loss might be reduced or prevented.

In the past, research has focused on a single product to prevent hearing loss and tinnitus. Studying only one single product has hampered research on tinnitus and hearing loss. In one sense, that would be like studying athletes by investigating only the right leg! Dr Choi’s work is important because he used combinations of products, and large populations to gather this evidence.
Hearing, tinnitus, and the whole nervous system are highly complex and involves many dozens of chemical reactions.

What I have done in Tinnitus Caps product is combine various elements such as the above with the known products that may aid the hearing mechanism. These include Selenium, Zinc, B12, B3, Zinc, and Gingko. I believe that no single one of the fourteen products will do the job of relieving Tinnitus or prevent deafness. What is done here is to combine these so that they support each other. For example, Selenium helps to regenerate Vitamin C and E.

Today we don’t have a means of restoring lost hearing. The goal is to prevent further hearing loss and relieve tinnitus.
We don’t have a single pill that will cure tinnitus. My tinnitus patients have benefitted: however Tinnitus Caps have only become available since September 2013. It takes several years to establish how well this works in the tinnitus population. More information at:

There are other factors to consider too: well controlled diabetes and hypertension, control of bad cholesterol, and healthy diet. Everyone must help themselves to take full advantage of the therapies available today for these metabolic diseases.

Just as important for hearing is to download a Sound Meter onto your Smart Phone so that you always know if the sound in your environment is too loud – above 95 decibels. The sound meter is free. Then, when you are seated in front of an eight foot speaker that is blasting away, and your meter reads 110 decibels, you know it is time to move. Today some restaurants play music far above 95 decibels so customers will eat fast and leave quickly for the next party; that is when your sound meter really comes in handy. Our specialty is your family : Comprehensive Quality Care for Every Age. Book Appointment >>

Orange Grove Family Practice is dedicated to providing the best possible care to our patients while maintaining the utmost level of honesty and ethical standards. We truly care about each of our patients and strive to provide a caring and compassionate clinic where you will feel safe, understood and appreciated. 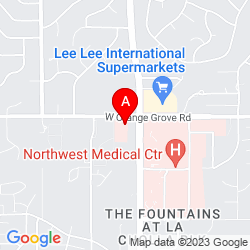